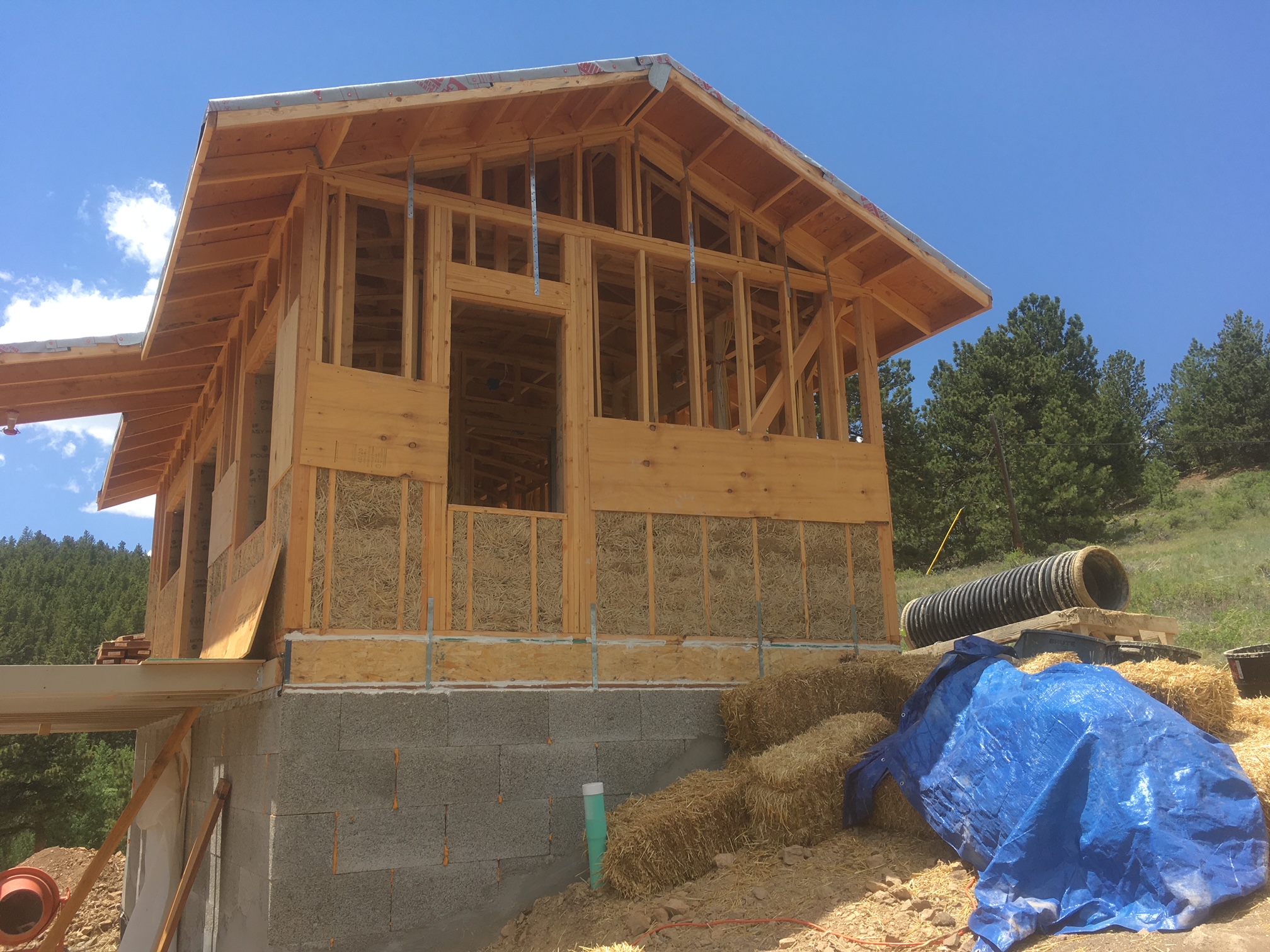 Light-straw-clay (LSC) is a building material primarily consisting of loose straw coated with a slurry mixture of liquid clay, called clay slip, that forms a bond. It can serve as a home’s insulation material along with being the structure’s envelope. To form a monolithic non-load-bearing wall, the coated straw is packed into forms, either temporary or permanent, that are situated between or around structural and non-structural members of a wall. Builders can incrementally move forms up the wall in six-inch courses, also called lifts, after the builders add a mix and tamp it within each section of formwork. To begin the drying process, temporary formwork can be removed within 24 hours of tamping and will maintain open exposure of the material until the clay dries and binds the straw. Once the light-straw-clay assembly is completely dry, the final product will have a wafer-like appearance that is surprisingly durable and is ready for permeable plastering.

Starting in 1990 and with inspiration from German builders, natural builder Robert Laporte introduced light-straw-clay to the United States as an attempt to wrap timber frames with a more energy efficient and earth friendly approach. Laporte sought an eco-friendly replacement to structural insulated panels, made of petro-foam and pressboard, that are commonly applied to timber frames. Laporte, along with his wife and architect Paula Baker-Laporte say their light-straw “out-sulating” technique has evolved since 1990 to a point of efficiency and viability for mainstream builders. The Laportes claim their technique uses more straw than in historic building techniques and in doing so, it meets more stringent energy demands and comfort levels.

As light-straw-clay has become a viable natural building method in the last half century, builders and planners will refer to it with many names and variations such as straw-clay, clay-straw, clay-slip-straw, slip-straw, rammed straw (akin to rammed earth wall systems), and the German word “leichtlehm” (light loam).

The density of a light-straw-clay assembly can vary and it will depend on the percentage content of clay, straw, the impurities of sand and rock, and compaction. If the amount of straw is consistent, mixes with less subsoil (or a lighter LSC composition) will most likely create a higher thermal resistance or R value for an assembly; whereas mixes with more subsoil (or a heavier LSC composition) will most likely create a lower thermal resistance or R value. Builders may strategize to add more mass (more thermal storage capacity) to a south-facing wall that has more solar exposure as well as creating less mass and more insulation features for a north or cold facing wall. Although higher clay content will assist a mixture to have more thermal mass, it may compromise the desired insulating property for a project. Builders can also compromise thermal resistance if the thermal envelope of the wall is not continuous or segmented by framing, which causes thermal bridging.

Douglas Piltingsrud of the LSC organization Design Coalition, Inc. has created a chart showing varying properties of different light-straw-clay mixtures along with depths, densities, and the likely R-value if the straw amount remains consistent. Based on the chart’s information, a basic formula that has a wall density of 13 lbs/ft³ (pcf) with a thermal resistance of R 1.69 per inch, a 12-inch wall of the density will have an insulation value of R-20, while a 15-inch wall will have a 25.4 R value. Starting with the 2018 International Residential Code, the International Code Commission has updated the LSC appendix code section on thermal properties and has implemented the Piltingsrud/Design Coalition, Inc. chart.

According to light-straw-clay experts Paula Baker-Laporte and Robert Laporte, the R-value (insulation value or thermal resistance) of a light-straw-clay home (enveloped with 12-inch walls) is roughly equivalent to a conventional home with six inches of fiberglass insulation. But what the Laportes stress is that the synergistic relationship of mass along with its insulation value is what creates the high energy performance for a LSC building. They further argue that because mass wall construction is not standard, mass is under-valued and not rewarded in most popular green building rating systems.

Prior to starting a large-scale LSC project, experts recommend doing at least three test blocks with mixes of light to heavy slips in order to determine the best optimal density and thermal performance for a certain wall or climate region.

Although loose straw by itself can be a flammable material, light-straw-clay experts say when it is mixed and coated with clay slip, they then consider the material as non-combustible. For light-straw-clay fire resistance testing, experts point to the 2004 study funded by the Canada Mortgage and Housing Corporation. According to the study’s author, fire testing results – based on ASTM standards E 119 and E 84 – show light-straw-clay would likely meet the conditions of a four-hour fire resistance period. According to German architect Franz Vollard, an early pioneer of modern earthen construction methods, his own fire tests of light-straw-clay showed the material does not contribute to the spread of fire and the formation of a charred surface layer protects underlying material from direct exposure to a flame.

For durability characteristics, the 2004 study funded by the Canada Mortgage and Housing Corporation says light-straw-clay is a highly ductile material, meaning it has a potential to absorb a fair amount of energy in the event of seismic activity. For compression characteristics, the study’s mid-range density sample shows a compression result of 11.9 psi at a 5% strain and a bend strength of 34 psi and a bending elasticity compression of 200 psi. The International Residential Code (IRC) appendix for Light-Straw-Clay requires builders to implement specifications for vertical and horizontal stabilization along with the values under the chart showing varying densities and other properties of LSC mixtures. The IRC requires builders to follow the code specifications or get a design approved by a registered design professional.

Experts consider light-straw-clay as non-toxic, as clay can absorb toxins with its large surface area along with having a negative ion charge. Organic straw can be used to avoid possible traces of pesticides.  Light-straw-clay walls have a high vapor permeability rating, meaning moisture, as vapor, can move through walls quickly, thus balancing interior humidity levels and enhancing air quality. Because of this characteristic, experts discourage vapor barriers for LSC walls. Clay in the material also promotes the vapor absorption characteristic as LSC experts consider clay as hygroscopic, meaning it can absorb high volumes of water vapor without losing integrity to the organic material that it is in contact with, such as wood or straw, and then it can also release the water or vapor when conditions change. With this characteristic, LSC walls can help regulate dampness while maintaining insulation qualities.

Research published in 2021 examined the environmental life cycle assessment of natural earthen and bio-based materials, with light-straw-clay among them, and compared them to conventional building materials in six climates. When coupled with embodied and operational environmental impacts, the natural assemblies reduced energy demand in a range of 27 to 73%, with the greatest reduction in Mediterranean climates. In all cases, the natural assemblies outperformed conventional assemblies with insulated rammed earth and light-straw-clay as the top performers in all six climates.

Experts warn that light-straw-clay will take a long time to dry. A rule of thumb by light-straw-clay expert Lydia Doleman is that a LSC builder will need one week of drying time for every inch of a light-straw-clay wall, which in turn means it will take an average of 12-weeks to dry a 12-inch wall. Wetter and denser mixes of light-straw-clay will also take longer to dry. If a mixture is too wet, it can slow the building process, as the mixture must be somewhat dry for builders to remove formwork. Wet mixtures can also create mold and insect habitats, although experts will consider some mold on wet and drying light-straw-clay as normal. In humid climates or where dry time is short, experts recommend the use of fans, dehumidifiers, and water thinners to avoid issues while a wall is drying. Tamping with less compaction in the middle portion of the wall cavity and not using heavy clay mixes will also help avoid drying issues. Experts also recommend that light-straw-clay walls not be thicker than 12 inches and that the assemblies be open on both sides when drying. The International Residential Code appendix for light-straw-clay dictates a maximum wall thickness of 15 inches for lighter densities (10 to 15 pcf) and 12 inches for heavier densities (20 to 40 pcf).

What is the best type of straw for LSC?

Experts suggest looking for straw that has maintained its shine and shows no visible signs of mold or insect infestation inside of the bale. Barley, followed by wheat, are the most efficient types of straw for building because of their high-water resiliency and bulkiness. The varieties also compress less, resulting in less straw needed for a project and fewer shrinkage capabilities.

How much straw is needed for an average size house?

Light-straw-clay experts Robert Laporte and Paula Baker-Laporte say they will average around seven pounds of barley straw per cubic foot of wall area and estimate their method (depending on wall density) will require approximately 7,500 pounds of straw to cover a 1,500 square foot residence. The proposal for the 2015 International Residential Code LSC appendix dictated that a light-straw-mixture shall have a minimum of 65% and a maximum of 85% straw, by volume of bale-compacted straw to clay soil.

How do I know if my site has good clay?

For a preliminary soil test, experts suggest owner-builders take a soil sample from a site and place it in a quart jar at a ⅓ level with ⅓ amount of water added. Next, the tester should shake the contents vigorously with the jar capped. After the mix settles overnight, the clay layer should be at least 50 percent of the tested volume of the jar. The clay layer will show itself as very fine particles that are smooth, slippery, and somewhat sticky to the touch. If a suitable clay is determined from the site, experts also recommend that builders test the site soil with various small batches of straw and repeat to see how well the mixtures hold up. In addition, builders can order laboratory testing to determine if they should add any purchased clay.

How much clay will I need?

Light-straw-clay experts Robert Laporte and Paula Baker-Laporte say they used 18,000 pounds of mortar clay for a 1,500 square foot home and recommend over-estimating for a project, as local clay sources are less predictable to ensure the correct clay quantity.

Are there regions where LSC might not be the best choice?

Light-straw-clay may not be suitable in regions where there are short building seasons and wet weather, followed by freezing temperatures, and when an access to straw and clay are limited.