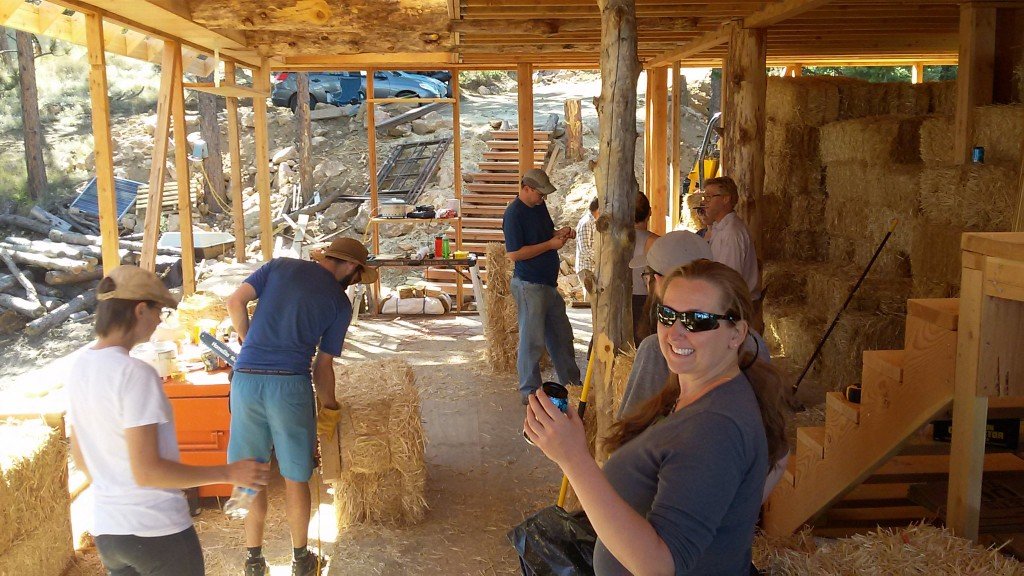 Well COSBA had a very busy September, which included hosting a bale stacking workshop, attending the Higher Ground Fair in Laramie, and having a strawbale home featured in the Boulder Green Home Tour, hosted by the Colorado Green Building Guild.  Check out their site and Facebook page for into and pics.

The bale stacking workshop was a huge success!  The 15 spots available amazingly “sold out” in about 48 hours, and we ended up letting a few extra wait-list folks in.  We apologize to anyone that was really looking forward to this!  Well try to come up with some other opportunities in the near future.

On September 22 and 23, our brave explorers Mark and Tonita traveled to Laramie, WY to take part in the Higher Ground Fair, a cool new event that gives us fond memories of the long-running Sustainable Living Fair in Ft. Collins, CO.  Here’s a write-up from Mark:

Since about the year 2001 COSBA had a presence at the Rocky Mountain Sustainable Living Fair in Fort Collins, CO. (2000-2015). Kelly Falbo is the director of the Rocky Mountain Sustainable Living Association (and still is) who ran the Fair all those years until they stopped doing the Fairs in about 2015. They boast (modestly of course) of promoting Leadership, the Environment, and Community to over 150,000 people. Speakers over the years included Yvon Chouinard, Founder of Patagonia, Winona LaDuke, Vice Presidential candidate and running mate of Ralph Nader for the 2000 presidential race, Woody Harrelson, actor/activist, and Darryl Hannah, actor/activist. Timbo Scursso  (Solarwise Natural Builders) did hands on workshops and Ian and I staffed the COSBA booths over the years. We miss those fairs. They were a great opportunity to meet with like minded folks and network to stay up with what’s new in our communities.

In early ’18 COSBA received a request from Celeste, one of the organizers of the Higher Ground Fair (https://www.highergroundfair.org/) in Laramie, WY., to give a talk on Natural Building and have a booth space for their Fair on Sept. 21 &22. Tonita and I accepted the invitation. The Fair included; Agricultural and Ranch exhibits, arts and crafts, Wellness, Dance, a variety of musical acts, cultural and sustainability displays, and more, from six Rocky Mountain states. I believe the Higher Ground Fair is on its way to filling the shoes of the RMSL Fair, and renewing a Fair presence for Rural Living, the Environment, the Community.

Tonita and I gathered the Strawbale and Hempcrete wall section displays from the Living Craft folks, a couple compressed Earth blocks from Colorado Earth, some books on SB building, a newsletter signup sheet, a power point presentation of Natural Building on a ‘stick’, the COSBA sign, and a solar cooker and headed out on our 2 hour drive north to Laramie. We were in the Sustainability tent that included one Earthship table, several farm/ ranch tables, a permaculture booth, other Sustainability related educational organizations, and COSBA. Traffic through our tent was pretty steady throughout both days. We had great conversations with attendees who had never heard of Natural Building techniques to a couple folks who were already starting their SB buildings or about to. We met interested folks from all over the Rocky Mountain states and a U. of Wyoming professor and his wife from Mexico who were very interested in the adobe/compressed earth blocks. I would like to say it was our brilliantly displayed table and sparkling personalities that was the major draw but I think it was the whiff of Tonita’s chocolate chip cookies baking in the solar oven that drew the most people. Hey, whatever it takes. We were spreading the ‘word’ and having fun. 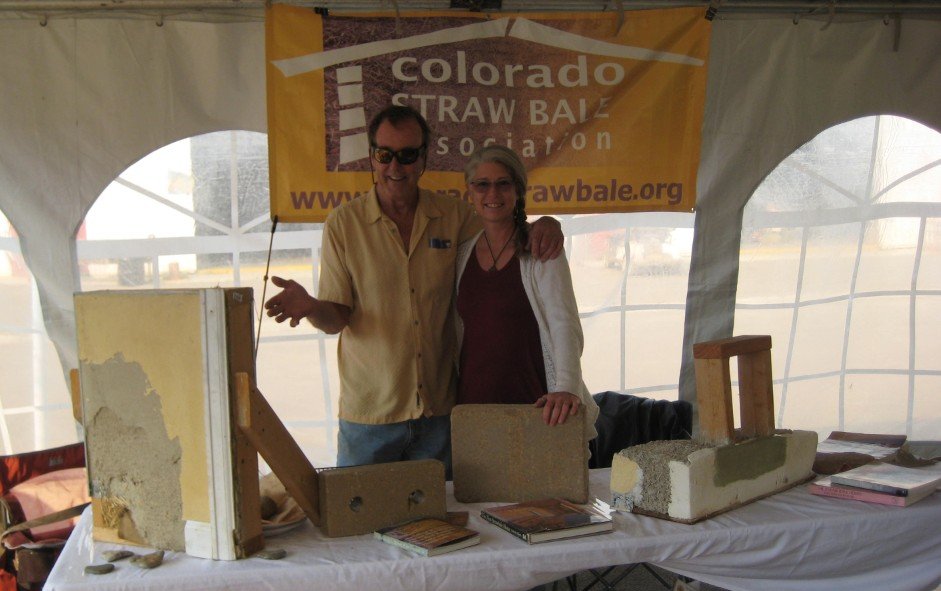